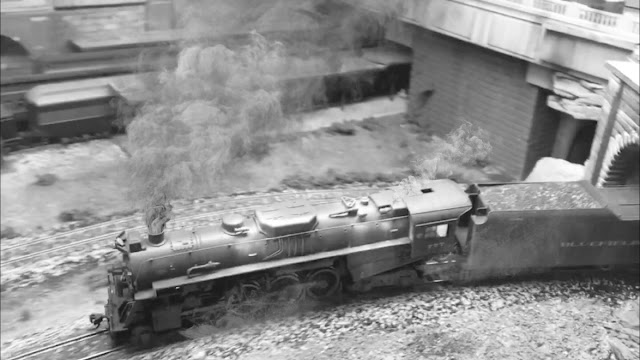 A hard charging Berkshire with a southbound time freight arrives in terminus, pulling past Terminal Station on the Mountain Division Line. This was the newest class of locomotive on the Bluefield until a couple of Norfolk and Western class As and a J showed up to help out with heavy high speed assignments. These Berkshires were mostly used for high priority mail and express and perishable trains. Later on, the Js took over the mail and express, leaving the Berks to haul high priority freight. The Bluefield Berkshires were slippery engines, but a well seasoned engineer could get good work out of one. The railroad also leased several Berkshires from the Nickel Plate, ever purchasing two of them when the NKP dieselized. 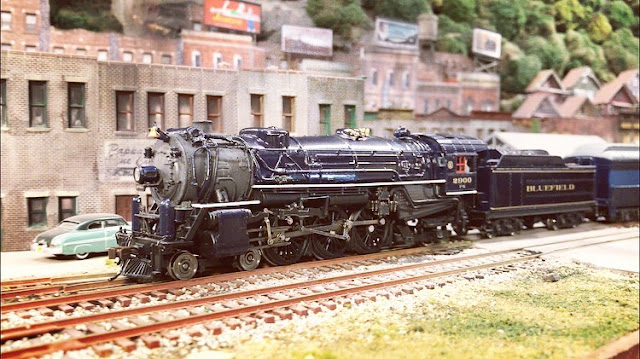 One of two P5 Pacifics painted dark blue for the Bluefield Flyer, 2900 departs Williams Ridge in early April of 1945. She has just undergone a rebuilding in which she had added an elesco feedwater heater along with other modernizations. Although she was the lowest numbered P5 on the roster, she was at this point the most modern. The rebuilding and added modernizations raised her tractive effort from 46,892 lbs to 47,500 lbs. 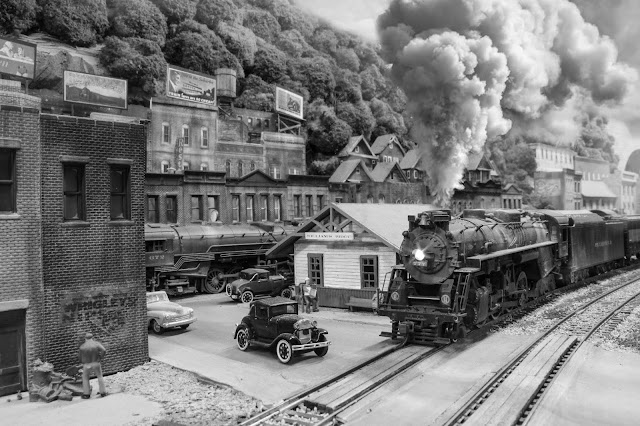 Division regular, number 777, storms through the town of Williams Ridge with a through train of reefers in the late 1940s.  A heavy Mikado switches the quarry on the other side of the depot. 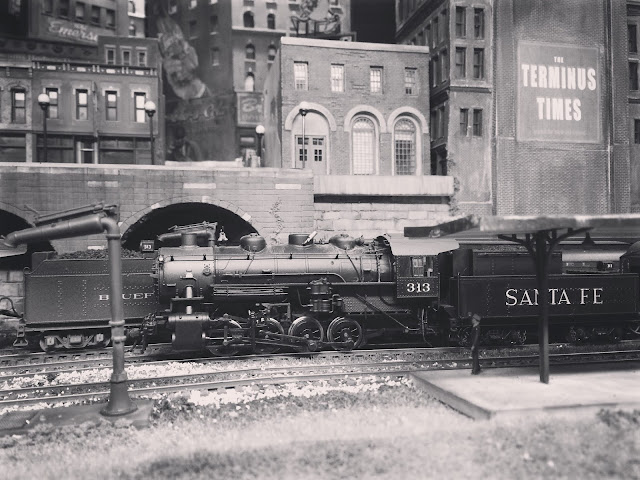 A former Santa Fe 0-8-0 is seen switching the Terminus engine terminal in mid March of 1938. 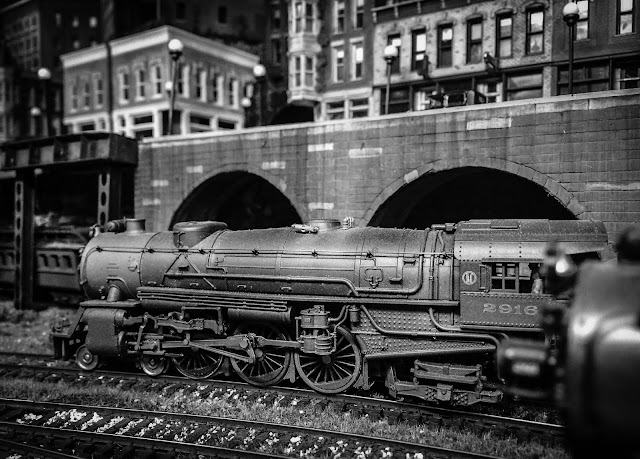 This photo of another heavy pacific in Terminus, shows some the famous arches that were so well known as part of Underground Terminus.  The city of Terminus was built up a level from the original city, therefore allowing streets to cross over the rail line and eliminate grade crossings.  This made for some very interesting scenes, especially as photograph from the so-called Terminus railroad gulch. 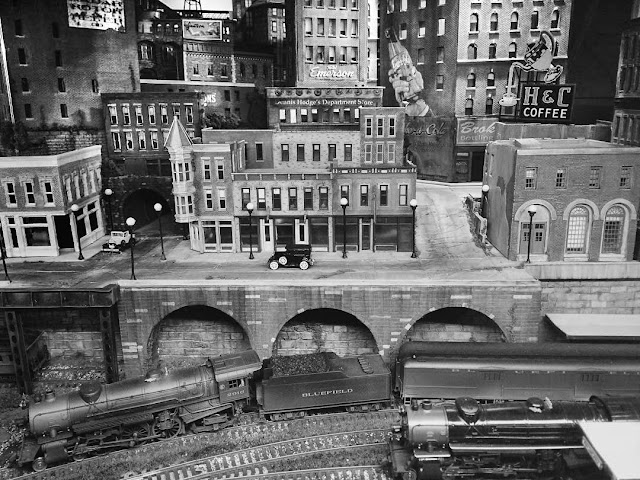 This view was taken from atop a factory that bordered the Terminus railroad gulch area. Once again we see two passenger trains at the Terminal Station platforms.  The terminal station head house is above track level off camera to the right.  This station saw trains from the Bluefield as well as the N&W and The Ironball System. 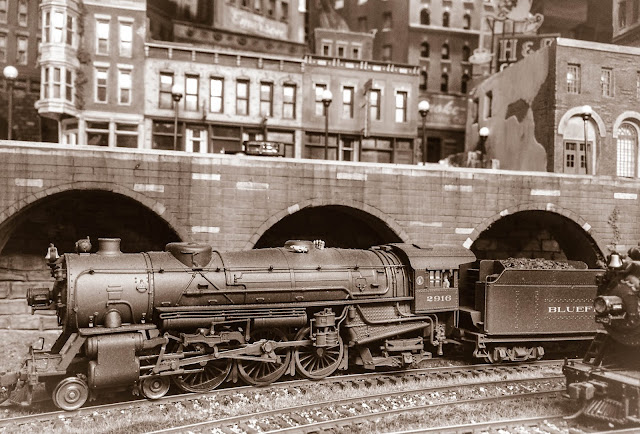 P5 2916 and P5a 2922 sit with southbound passenger trains at Terminus Terminal Station, sometimes in the late '20s. Both engines were regular passenger power on the line from the mid '20s through the '50s. This scene would be repeated daily for years to come. 2922 has The Southbound Bluefield Flyer while 2916 is in from the Point Pleasant Branch with #7.  Both trains are bound for Bluefield. 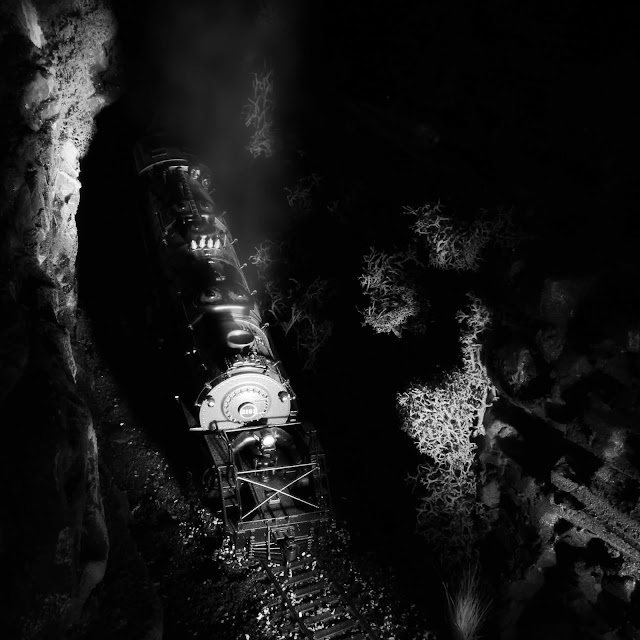 An N&W Y6b runs through the deep cut at the old Post Tunnel. Although this nighttime photograph looks like the work of O. Winstorn Link, this photo was actually taken by railfan Charley Butterworth, perched high above the track, likely on one of the piers of  Post trestle on the new line.  The fact that there is a Y6b running on the old line suggests this is leased N&W power running on the Bluefield before the 1950 buyout.

A visitor on the Bluefield. 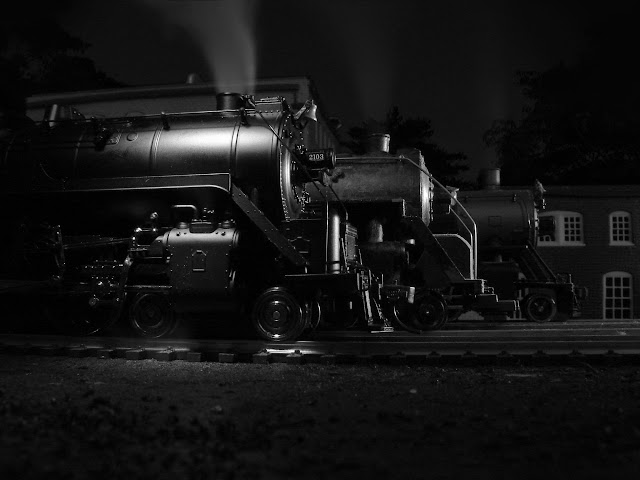 In 1946, The Bluefield was considering its options for adding to its fleet of modern steam power for freight service and decided to borrow locomotives off of other roads to test their performance on the Bluefield. One of the locomotives tried was a Reading T1 4-8-4, 2103. The T1 design was the result of a collaboration between the Reading Company and Baldwin locomotive works, and they were built by elongating the boilers of several of the Reading's large 2-8-0s and building a new engine around that key component. They proved so successful that the Reading built 30 total.

In this nighttime photo, 2103 sits alongside a Bluefield P4 Pacific and a class M Mikado, the night before her trial runs were to begin. Eventually, The Big 4-8-4 was deemed to long the drivers too big for the Bluefield. After her trials, she was stored temporarily at Mount Frigid before being returned to the Reading. 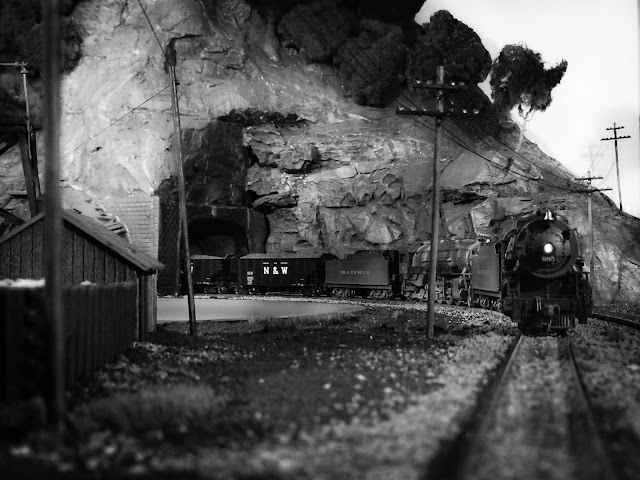 Doubleheaded Mikados blast forth from Mount Frigid's North Tunnel with a southbound freight. Even on the relatively short trains seen on the Bluefield, doubleheading was often necessary. The Bluefield was primarily a coal hauler, and most of that coal was bound for the connection with the N&W. 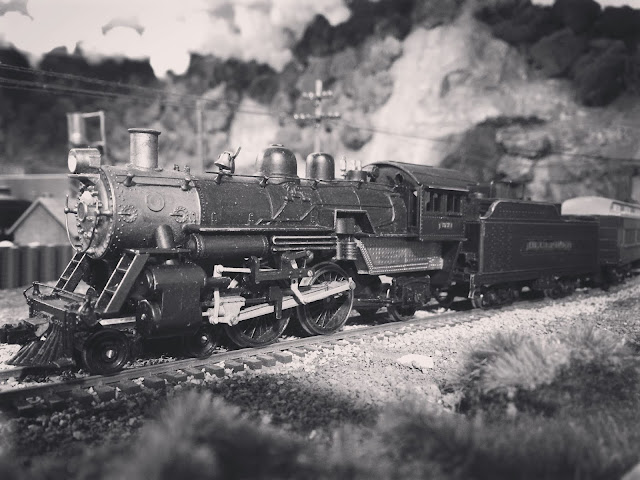 Original power for the Bluefield Flyer came in the form of 4 beautiful little Atlantic type 4-4-2s.  1571 is seen here on the main line at Mount Frigid, pausing for a photo, possibly for use as a publicity photo. The train moved fast and sported a Victorian style coach/baggage combine, a very fine coach with a women's dressing area attached to the women's restroom and a parlor/observation car.  When the railroad wanted to replace the consist with heavyweight equipment, the 4-4-2s proved not powerful enough.  in 1910, light pacifics 915 and 916 became the standard power for the train. They were finally replaced by the larger P5s in 1923.

Pacifics in the Roundhouse 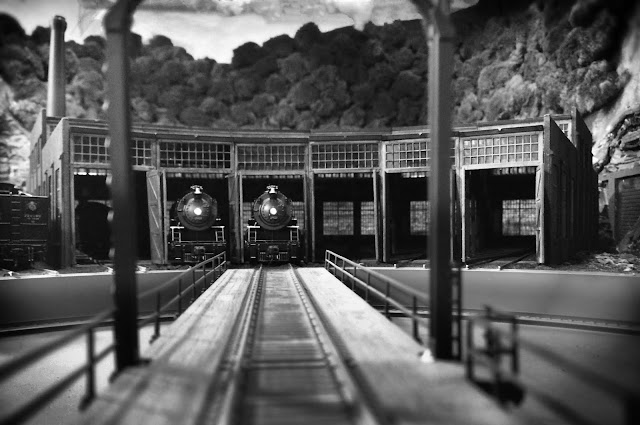 Here we see pacifics, 2900 and 2922 with their noses sticking out of the Mount Frigid roundhouse. Mount Frigid was a division point and essentially the midpoint of the Bluefield to Fairmont mainline. All north and southbound trains would change engines and crew here. 2900 and 2922 were  regular locomotives on the Bluefield Flyer and Pittsburgh Limited as availability allowed, and both engines were kept exceptionally clean for that service all the way up to the end. 2900 was one of 4 locomotives painted "Bluefield Blue" with gold lettering for service on the flyer. In later years she would be the only heavy pacific to keep her Blue Livery. Early on, all passenger engines ran with gold lettering instead of the standard yellow, but this too was [mostly] phased out later on. 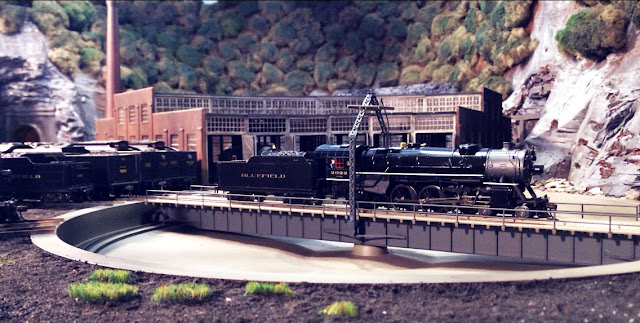 This color slide, taken the same day as the previous photo shows P5a pacific 2922 proudly displaying the gold lettering on black livery.  She was one of several engines to keep the gold lettering, even after the railroad had mostly phased it out for the cheaper yellow used by all freight power. 2922 is about to back to the waiting Bluefield Flyer for the run north to Fairmont where the train will likely be turned over to a New York Central Hudson for the run into Pittsburgh.

A Brand New 777 has arrived fresh from the factory 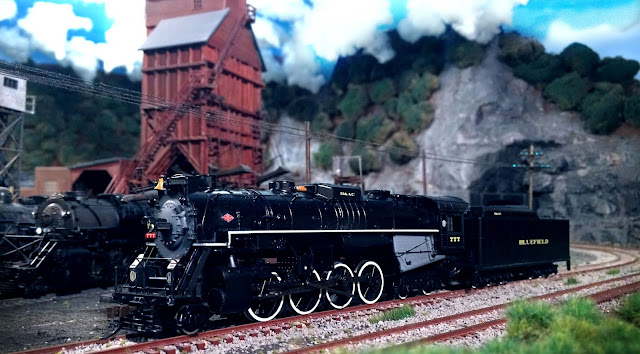 In this striking color slide, a brand new 777 has just been delivered to the Mount Frigid Engine Terminal from her birth place in Lima Locomotive Works in Lima Ohio.  The Bluefield ordered a total of 4 Lima-built Berkshires, numbered 775-778. They were essential copies of the famous Nickel Plate locomotives of the same wheel arrangement. When she arrived, the 777 had white running boards and white trimmed drivers (a look typically reserved for passenger power). She also sported a handsomely sheathed smokebox. The engine would not keep her fancy appearance for long, as tough mountain railroading and the many tunnels located on steep grades created less than clean conditions for any steam power. 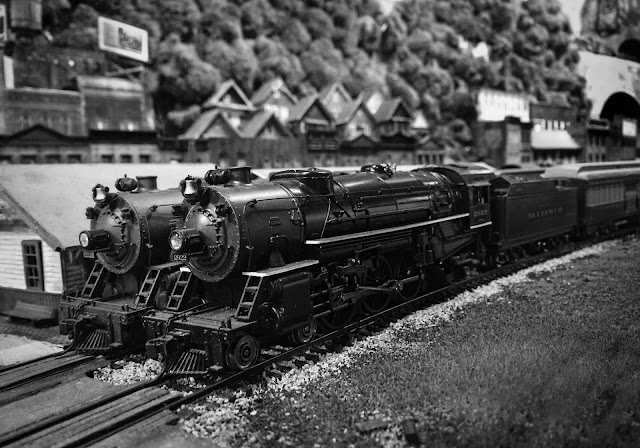 Two passenger trains pose in front of the William's Ridge Depot in June of 1940.  The train closest to the camera is the Bluefield flyer pulled by a well maintained and spotless P5a class pacific, number 2922. P5 2916 is one track over, with a passenger local. 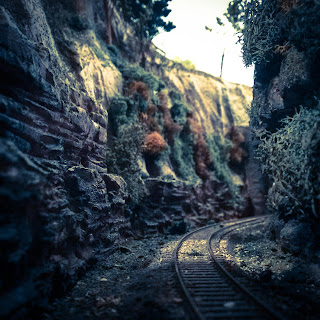 This nice color slide shows the old line, near the old post tunnel.  This image was shot just after the line through the old post tunnel was abandoned and the new one was opened to service. In taking this picture, the photographer captured a scene that would soon be completely lost to history.  This portion of the former mainline can now only vaguely be seen from trans passing on the relocated line at a higher elevation. The cut is mostly full of undergrowth and the rails have been removed. 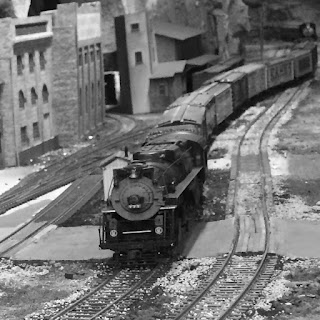 A Bluefield 2-8-4 makes her way slowly through Williams Ridge with a reefer train in tow.  Bluefield had several 'hotshot' freights, and although they were not extremely high speed, they were faster than one would assume on a steep and winding road like the Southern Allegheny Division. 777 was a division favorite as far as heavy home steam power. She was a bit slippery on the grades, however, as were the other 2 original Bluefield 2-8-4s. The railroad continued to make small adjustments to try to give the engines better starting power. 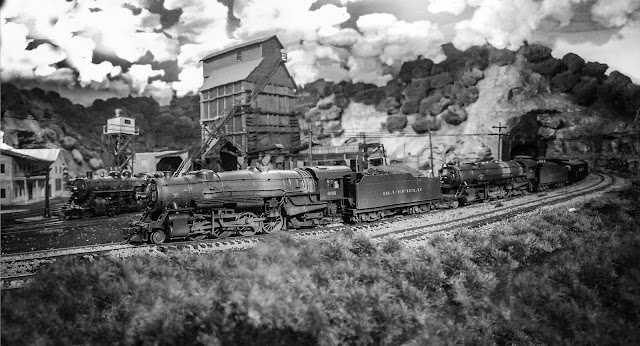 A double headed southbound coal train passes Mound Frigid Engine terminal behind 2 M4 Mikados. The year is 1948. The Train originated in Mount Frigid yard on the other side of the mountain. The coal came from mines north of Mount Frigid and most of it will continue south to Bluefield, where the N&W will take it to the port at Lambert's Point. These through coal trains were seen regularly on the Bluefield and were the railroad's bread and butter. Once N&W took over the line, articulated N&W power could be seen more and more on these through coal trains.

A Bluefield Pacific, 2916, crosses the crossing in the middle of downtown William's Ridge. A 4-4-2 class E, Atlantic type sits with a short passenger train at the station platform. In the far background, there looks to be a Mikado running down main street, delivering some freight cars to their industries.

A line of of 3 locomotives illustrates the main 3 locomotive classes used in the 1940s and early 1950s. The B class Berkshire stands obscuring the view of a P5 Pacific and M4 Mikado. 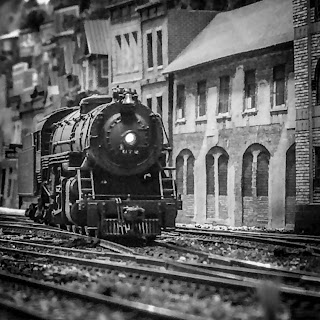 Heavy Mikado, 672 makes her way through the maze of switches at the north east end of William's Ridge. She has just finished switching out her freight cars and is headed to the engine terminal at Mount Frigid.

This photo was taken at the Mount Frigid Engine Terminal in fall of 1950. You can see N&W 1238 on the right. She was a regular guest o... 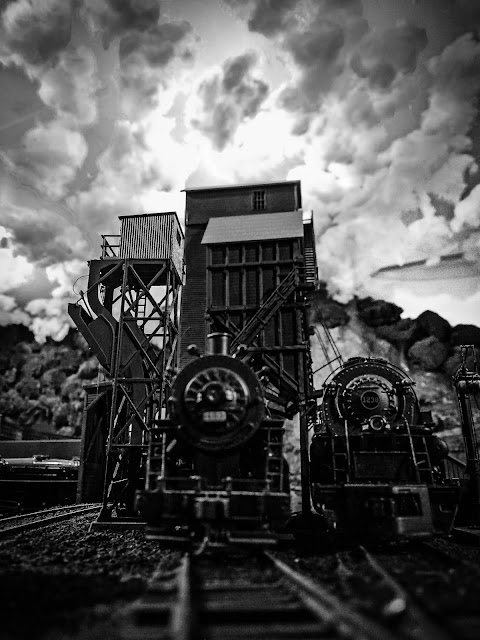